CYCLE TO THE CINEMA 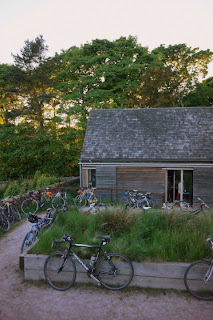 The National Trust's Moorland Discovery Centre, at Longshaw near Hathersage, and Heason Events (http://www.heason.net) - Peak District based organisers of the annual Sheffield Adventure Film Festival and Buxton Adventure Festival – have launched a new series of film screenings with a difference – the first was a huge success and the second event is fast approaching -  on Tuesday July 2, 7.30 – 10pm.

Tuesday’s show features two films with a shared spirit of adventure; North of the Sun, and Oil & Water Project.  Oil & Water Project tells of the adventures of Seth Warren and Tyler Bradt, two friends and world-class kayakers who drove, petroleum-free, over 21,000 miles down the in a retro-fitted bio-diesel Japanese fire truck named "Baby". The film captures their passion for sustainable living practices and the humor they maintained in the face of many challenges along the way.  North Of The Sun follows two Norwegian friends who have a crazy idea about building a beach hut north of the arctic circle and spending the winter living off flotsam and jetsam.  Extreme beach-combing, stunning cinematography and a cabin Bilbo Baggins would be proud to call home.

As the title suggests, cyclists are encouraged to take on the challenge of pedalling to the beautiful countryside venue to watch the rolling programme of films, promoting both adventure and sustainability.  The venture is a partnership between Heason Events, the National Trust in the Peak District and the , who will have bike-maintenance help on hand to get your bike fixed while watching the film, as well as cake and drinks on offer. 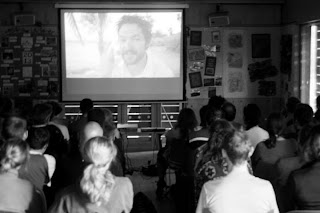 There are tickets currently on sale for three future screenings, and further information can be found here: https://www.facebook.com/CycletotheCinema, http://www.eventbrite.co.uk/event/6822421045# (Tues 2 July screening). Tickets cost £6 or £8 with coffee & cake.

Helen Tuck, Visitor Experience Manager with the National Trust in the Peak District says, “We are really excited to be a part of this exciting venture in partnership with Heason events, which celebrates and encourages cycling and brings people out to Longshaw, one of our most beautiful places in the Peak District and just 7 miles from Sheffield, and with the added bonus that for most people it will be down hill all the way home!”

, event organiser says: "The first night was a sell out, with most people arriving to the centre by leg-power for the chance to watch adventure films in a stunning place.  If there are any aspiring adventure film-makers out there, I'm keen to showcase local talent with shorts ahead of the main bill so please do get in touch."
Posted by National Trust in the Peak District at 4:05 pm No comments:

Burbage to be transformed

The site of a conifer plantation in one of the most popular areas of the Peak District is going to be transformed as part of a conservation initiative to restore declining woodland and improve the landscape for local people and wildlife.﻿﻿﻿﻿

﻿ ﻿
The 83 acre Burbage plantation, owned by Sheffield City Council, was originally planted in the in the early 1970s and is well-known to the many people who climb, walk and relax in the Valley. However, the plantation has not grown well and now needs to be removed as it has reached maturity. The current woodland provides few benefits for wildlife and is in significant decline. Trees are beginning to blow over causing health and safety concerns and a fire risk.

Ted Talbot, Woodland Manager for the City Council, says: “Work on removing the trees is being scheduled to start at the beginning of September and, weather permitting, should be completed by Christmas. Some of the site will then be restored back to moorland, while the rest of the area will be replanted with native oak and birch woodland, benefiting a range of wildlife.”

The project is funded through the Dark Peak Nature Improvement Area, a large-scale conservation initiative, which was created to improve, expand and link up existing wildlife-rich areas within the including Burbage Moor.
﻿﻿ ﻿ ﻿
Ross Frazer, Project Manager for the Dark Peak Nature Improvement Area, says: “The Burbage plantation has been part of the landscape of the valley for several decades but it was never meant to be a permanent fixture; it was originally planted as a crop.

“Once the site has been cleared, it will look much like it did 40 years ago but in another 20 to 30 years there will eventually be a new native woodland much like Padley Gorge along the valley, which future generations will be able to enjoy.

“As is such a popular attraction, we have scheduled the removal to take place after the summer holidays and will only be working on weekdays to minimise disturbance.”

Ross Frazer will be in the top car park at on the following dates to explain how and when the work will be carried out.