The Right to Ramble

Celebrating 80 years of open access on Kinder Scout
It’s been 80 years since the scenery of Kinder Scout first inspired working-class ramblers from the industrial cities of Sheffield and Manchester to trespass over its expansive moors. They believed they should have the right to ramble across open country, even if it was owned by someone. The now famous Mass Trespass happened on 24 April 1932, when nearly 500 walkers, locals and members of the ‘Right to Ramble’ organisation gathered to gain access to the local landscape. What followed was a brief but vigorous battle with landowners and gamekeepers who tried to halt their progress, before the walkers victoriously marched on to Ashop Head.
﻿ ﻿ ﻿
Several ramblers were later arrested and five of them received jail sentences of several months, on charges of incitement and riotous assembly.
The Mass Trespass had a far-reaching impact and was a pivotal moment in the campaign for better access to the countryside. Its success eventually paved the way for the creation of the National Parks and in 1951, the Peak District National Park was established, opening Kinder Scout to the public for the first time. In 2004 the Countryside Rights of Way Act came into force, giving walkers more rights to roam over open country and common land.
As well as the 80th anniversary of the Mass Trespass, 2012 will also mark 30 years of National Trust ownership of Kinder Scout. This iconic landscape welcomes hundreds of thousands of walkers and other visitors each year. But its popularity can create problems such as erosion, and we need to manage Kinder Scout – and other areas of the Peak District – to preserve their beauty for future generations.
The National Trust, with your help, is restoring vast areas of moorland in these areas by reducing grazing and improving the vegetation by heather seeding and planting cotton grass. Overgrazing and erosion leads to areas of bare peat, which are then in danger of being washed away by heavy rain, forming deep gullies and releasing carbon into the atmosphere. Native moorland plants like cotton grass help to ‘bind’ the loose peat and so prevent further erosion – returning the moors to their former glory.
To mark the anniversary of the Mass Trespass members of the Kinder and High Peak Advisory Committee are organising a week of walks, talks, exhibitions and events at various places, beginning on Tuesday 24 April when there will be a launch event at the Moorland Centre in Edale. Speakers will include Stuart Maconie, writer and broadcaster, Dame Fiona Reynolds, Director General of the National Trust and Kate Ashbrook of the Open Spaces Society. Events will include a re-enactment of the Mass Trespass, with groups of walkers from Hayfield and Edale meeting at Kinder Low.
Full event details will be on the Kinder Trespass website at http://www.kindertrespass.com/
In the meantime, you can follow in the footsteps of the 1932 trespassers with our free walk sheet and map. You can retrace their historic route by downloading and printing the walk sheet out before you visit.
By Helen Tuck, Community and Learning Officer
Posted by National Trust in the Peak District at 2:39 pm 2 comments:

Come and find out about the Sheffield Moors Partnership. Contribute your views and ideas for the development of a draft masterplan to shape the future of this magnificent area. 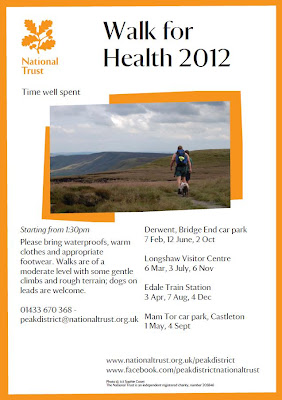 Please bring waterproofs, warm clothes and appropriate footwear. Walks are of a moderate level  with some gentle climbs and rough terrain; dogs on  leads are welcome.
Each walk starts from 1:30pm, lasts approximately 3 hours and is free of charge.

For more info on these walks or on any of our other events please contact: 01433 670 368 peakdistrict@nationaltrust.org.uk
Posted by National Trust in the Peak District at 11:42 am No comments:

10 years in the Alport Valley

The remote Alport valley set within the area of the is an exceptional scenic landscape which includes one of the biggest natural landslips in the country, Alport Castles. Around sixty species of birds can be found here including Skylark, Spotted Flycatcher and Reed Bunting. The valley is rich in invertebrate life and is internationally important for fungi growth; conifer plantations were introduced to the valley between 1930 and 1980. 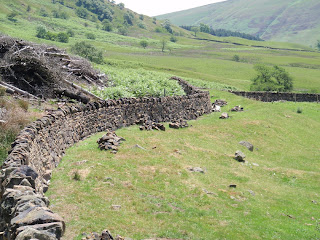 An important partnership between the National Trust and the Forestry Commission commenced in 2002 with steerage from the Alport Advisory Group; consisting of other interested organisations and the local community with the aim to achieve favourable condition of habitats.
One of the commitments of the National Trust was the complete restoration of all the major dry stone walls within the valley. Dry stone walls are one of our main historic cultural heritages spreading across northern for hundreds of miles. They are the backbone of the countryside and provide a mosaic patchwork quilt spreading across the varied landscapes.
Building of dry stone walls was believed to have started in the 16th Century; the National Trust has records which confirm some of the dry stone walls in the Alport date from the 1630’s. These are the earliest recorded dry stone walls on our land in the Peak District and are now an important archaeological feature of our past.
The National Trusts Estate Team consists of five estate workers, whose work tasks consist not just dry stone walling, but stock fencing, hedge laying, footpath construction, chainsaw work and a wide range of moorland conservation work. Starting in 2002 we have spent one to three months each year up to early 2012 rebuilding 16 dry stone walls which totalled 1,486 metres in length. 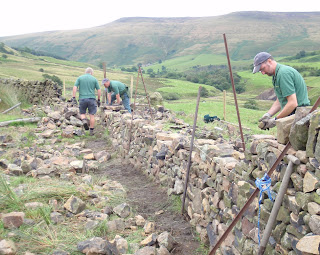 Each dry stone wall is built approximately 1.40 metres high. Each square metre of the wall consists of 1 tonne of stone. This means that the 1,486 metres of wall has required 2080 tonnes of stone to be taken down and rebuilt, which has taken around 300 days and approximately 9,000 man hours to complete the project.  The walling has been done in all conditions, including wonderful warm summer days, driving rain, and freezing cold days with snow on the ground, where each stone has had to be forced out of the solid earth with pick axes.
The walls are still very important for the modern farmer by providing strong boundaries that contain stock in fields. They provide valuable shelter from severe weather conditions and also allow ewes to give birth with protection from the elements vital in a lamb’s first few hours. It has been a memorable, enjoyable and immensely satisfying achievement to contribute to the restoration of these valuable historical features.
Steven Lindop
Estate Team Supervisor
Posted by National Trust in the Peak District at 11:50 am No comments: