The National Trust have been involved in restoring the damaged moorlands of Kinder Scout and Bleaklow for over 30 years. The internationally recognised habitats are home to many unusual plant species and we are beginning to discover many more. In the last few years plants which have not been seen before are beginning to colonise the restored areas. These plants include the following:
We are also seeing an increase in Sphagnum Mosses which play a vital role in formation and maintenance of the peat bogs and along with the other species suggest an improvement in general environmental conditions. 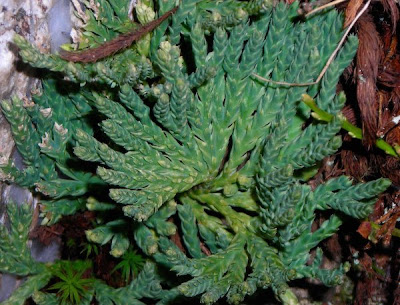 Posted by National Trust in the Peak District at 2:22 pm No comments:

Goodbye to our new volunteers, for now....

We recently said goodbye to our latest volunteers, some lovely ponies that are helping with our conservation management at Alsop Moor. 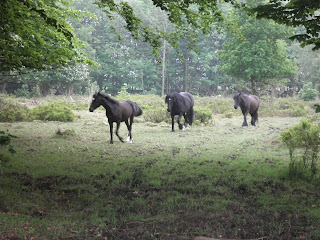 The plantation hides a rare Limestone Heath in its midst which would revert to woodland if left to its own devices.

The ponies which have called Alsop Moor home for a few months have been busy eating tree seedlings, brambles and grasses which can all get out of control and smother the rarer heathland plants like heather and bilberry. 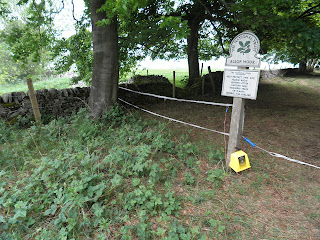 The ponies have now left the area so that the bilberry and heather can flower and set seed, but we hope to see them again next year.

Mark Cunningham, Ranger
Posted by National Trust in the Peak District at 11:37 am No comments: 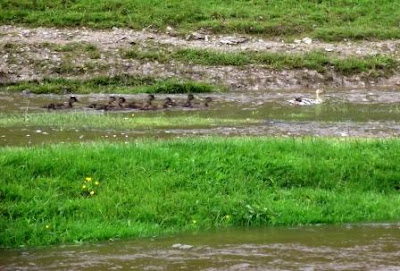 Another morning trip to Dovedale to pick up litter and check on the river level and the stepping-stones!
The road was flooded and the wave produced by the wheels of the vehicle sent a Mallard mum and her youngsters out from the cover of the bank and into the middle of the fast-flowing river. The youngsters being big enough now to take care of themselves, I wasn't unduly worried for their safety but, nonetheless, watched their progress: 1..2..3..4..5 young Mallards - well done mum! Then I suddenly remembered; the pale female, in this area for the past few weeks, and her seven youngsters...
Now, Mallards are not uncommon in Dovedale but every year when the new broods arrive it is impossible not to follow their progress. With each female occupying a territory so that, in addition to her markings, it is fairly easy to monitor the progress of individual families, it is always interesting to see how many of the original brood make it through. And no matter how common they may be, it always a little saddening to realise that not all the chicks from a particular family have made it to adulthood.  So here was my 'Thorpe Cloud Family' down in number by two.  Oh well, that's life. And the remaining five seemed to be coping well with what nature had to throw at them thus far.
Slightly saddened, I have to admit, I put the vehicle back in gear and started off down the road. Which immediately sent two young Mallards rushing out from the shelter of the bank to join their mother and siblings in the torrent!! Having made it expertly to the other side of the river, the family cruised smoothly under Thorpe Cloud. I felt the need to double-check: 1.. 2.. 3.. 4.. 5.. 6.. 7!  Well done little guys and well done mum! I do like a happy ending!


Posted by National Trust in the Peak District at 12:35 pm No comments: 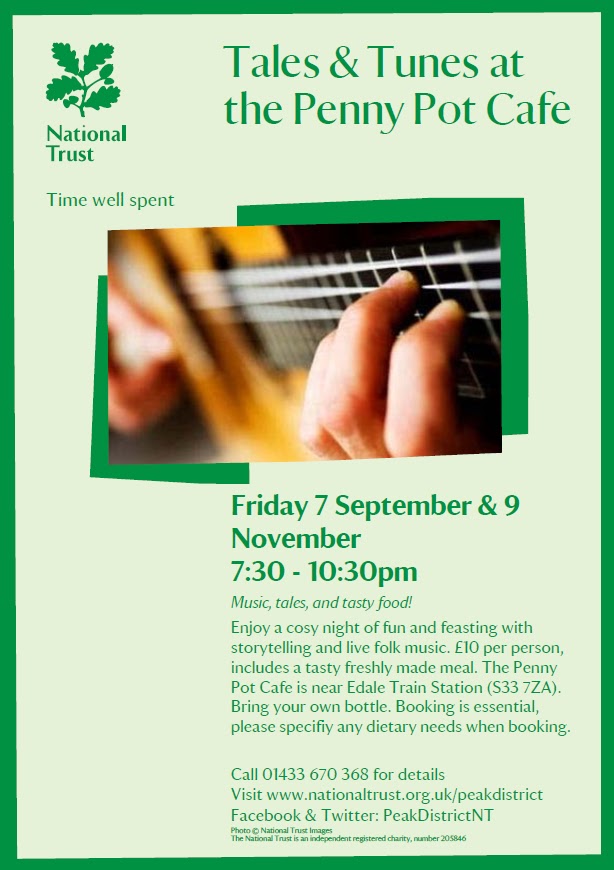 Posted by National Trust in the Peak District at 3:25 pm No comments: 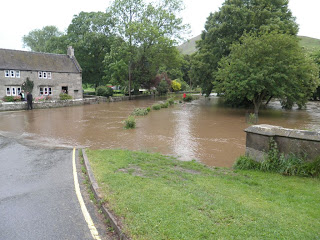 On Saturday I arrived in Dovedale to find the river in a state of flood. The tarmac road was flooded from about half way up and deepened to over knee deep approaching the Stepping Stones, they were completely invisible. I estimate there was at least 2 ft of water covering them. The Thorpe Cloud riverside footpath was also severely flooded making access into the dale hazardous.

I put out a number of signs advising visitors of the hazards. In addition I asked Steve, the volunteer Patrol Ranger, to patrol the area all day as a point of contact and help for visitors. 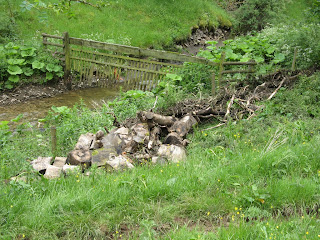 Wetton Mill – Ranger Mark Cunningham did an emergency delivery of sandbags on Friday afternoon, and the flood missed getting into the holiday cottages by a few inches. Jeanette, the tea room proprietor, has some spectacular photos of the extent of the water in and around the yard which she intends to frame and display in her tea room. The buildings adjacent to the river were flooded by about 3 ft and Jeanette lost some of her stores which were replaced from stores at Ilam.

In the , the normally small tributary, Hoo Brook, broke its bank and washed out a huge habitat pile to about 50 yards below its original position, it only being stopped by a stock fence which acted as a giant tea strainer.

Milldale- I placed a sign on Viators Bridge advising the Stepping Stones were flooded – I also swept out the flood debris from the barn and cleared the blocked culvert by the gate. 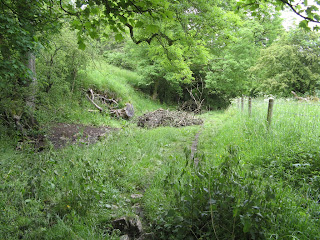 By Sunday the waters had receded slightly and the top of the Stepping Stones were partly visible. Two of the stones had been dislodged making access across the river impossible. Also a large quantity of debris had accumulated both on the turning circle and the stones – as both were still flooded on Sunday morning I have not removed them. I have made three more signs “Stepping Stones Closed – Damaged by floods” and placed them either side of the cattle grid and on the nearby pedestrian gate.

Even so a good number of visitors walked past the signs and were seen to attempt to cross the gaps in the Stepping Stones – a hazardous exercise considering the force of the swollen river between the remaining stones and the large gap created.

The plight of the nesting water birds can only be imagined. Although the adults would survive any nests with eggs or young near to the water line must surely have been lost, also fledgling young would be swept far downstream, quickly losing contact with the parent birds and bringing their chances of survival to nil.

By Wednesday the river had receded, but was still flowing over the road, indicating the huge volumes of water which are still flowing down from the surrounding hills. 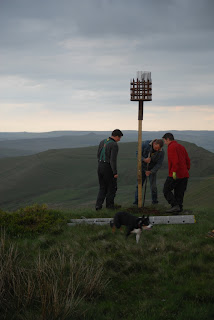 Can we light a jubilee beacon on Lords Seat? Well yes, but it's not the easiest place to get to. I think it’s Derbyshire’s highest hill (Kinder, Bleaklow etc are higher but are plateaus)

A few phone calls to local farmers to make sure they are ok with things, find the burner basket / brazier – last seen about 6 years ago! Load everything onto a trailer behind the Landrover the afternoon before the event, then go and help rescue a cow out of a 10ft deep hole. Not part of the plan, just something to make the clock tick faster and make us worry more about having everything ready for lighting the beacon at 10.15pm. 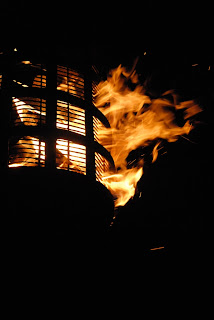 Anyway, an enthusiastic group of helpers, 2 Quad bike trips, a couple of bottles of wine and cakes, and its all ready to go ( magic ingredient: some kindling sticks soaked in Diesel).

It was a fantastic night for lighting Beacons, clear and a bit of a breeze to keep the fire flaring, then a full moon appearing from behind the clouds about 11pm.  About 40 “ Beacon Seekers” appeared out of the darkness to enjoy the atmosphere.

A few of us had decided to stay up there all night and camp or bivi, then tidy things away first thing in the morning. It was a little bit cold and having to remove a slug from the side of your face is not the best way to greet the morning, better than having a dream about eating a liquorice allsort though.

The Skylarks were up and singing at 4am, so drift in and out of sleep for a bit and then up at 6am for a brisk walk around to get warm. Half an hour later Mark was appearing out of his tent – saying how comfy it was! Kettle on for a brew and then Jenny appeared out of her tent leaving her friend to slumber on. Jenny wearing her Teddy Bear furry jacket and walking about barefoot through the bilberry, definitely a Fairy Child!

Cups of tea, chat, and watch the early morning mist rolling over the ridge between Mam Tor and Losehill.

Definitely need another excuse to Bivi out again! 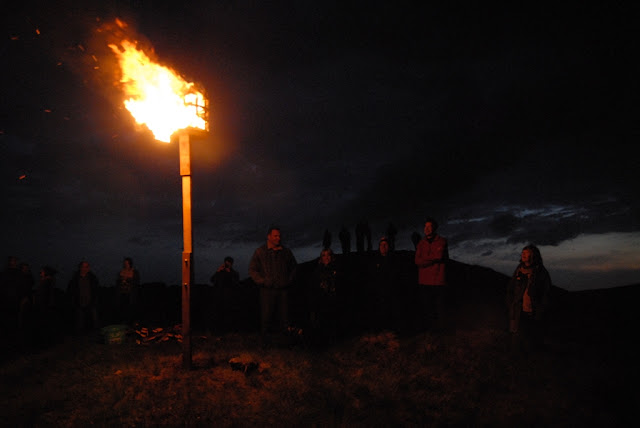 Posted by National Trust in the Peak District at 1:52 pm No comments: 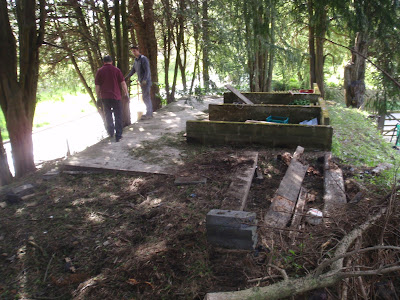 The National Trust Estate Team were given the task of creating a new seating area at the Penny Pot Café on a derelict piece of land where before an old shed had stood. The idea was to create a seating terrace providing more space for people to sit.

There were rough steep steps leading to a concrete base where we believe dog kennels had been previously.

The concrete base had small walls which had to be knocked down to provide a level platform.
Having dismantled the shed and transported the rubbish away, of which there was plenty, we dug out the old steps.

The team then put up a post and rail fence around the concrete base to prevent people falling down the steep banks. This involved digging in 24 posts to a depth of three and a half feet; which was very hard work! The rails were then added and instead of steps, a ramp was built to provide easier access for prams and wheelchair users. The ramp was two foot above the ground in places and had to be shored up with timber boards. Due to the difficult access we used our powered wheelbarrow to transport the materials from the roadside, round to the back of the café. 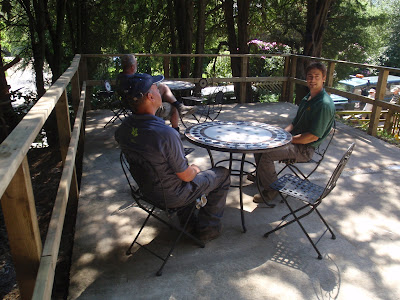 A small dry stone wall was built in front of the timber to make a decorative feature and a fencing panel was inserted to screen off the car parking area.

Custom built picnic benches have been ordered for the terrace which is situated under the tree canopy and offers welcome shade during very warm weather.

The Estate Team were sustained throughout the hot weather by the hospitality of Pat Furness and Susan Chapman, the friendly catering staff who work at the Penny Pot Café.

There have been some new additions to the gardens at Ilam Hall recently in the shape of several terracotta pots which have been introduced primarily to display the Octavia Hill geranium. 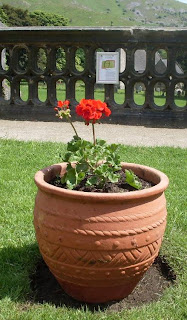 The plants are displayed in the Italian garden, adjoining garden and tea room area. 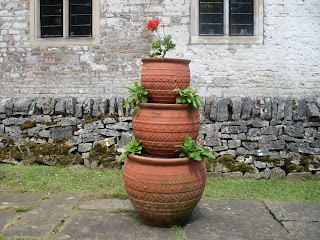 Octavia Hill (1838-1912) was a truly remarkable woman whose life was dedicated to helping the poor by improving their quality of life through social reforms and public health pioneering.

Octavia’s environmental campaigns resulted in the retention and creation of urban and country open spaces, parks and city corners.  Octavia’s strong beliefs in the importance of clean ‘open spaces’ for the well being of individuals, led her to become one of the co-founders of the National Trust.

More information on Octavia Hill's life and work can be found here on the National Trust web site.

Posted by National Trust in the Peak District at 10:49 am 1 comment: