NT press release 15 November 2010
The National Trust has secured over £2.5 million to carry out the next stage of major restoration work on Kinder Scout. The project will take place over 5 years starting in 2011 and will see vast areas of the bare and degraded blanket peat landscape restored by gully-blocking, brash spreading and moorland revegetation work. Funding for the Kinder restoration project has been secured from the Biffa Awards Scheme, United Utilities, Natural England’s environmental stewardship funds and the National Trust.
If this restoration project is to be successful a temporary sheep proof fence will be required to allow the newly planted vegetation the opportunity to get established while keeping open access to Kinder Scout for walkers.
Because Kinder Scout is so closely associated with access, the National Trust is launching a public consultation on 1 December to decide on the final location of the temporary fence line and where the access points for walkers should be. Since acquiring Kinder Scout in 1982 the National Trust has already undertaken a lot of restoration work to reverse the legacy of 200 years of environmental and land use pressure. This project is the next phase in the restoration process.
Mike Innerdale, General Manager for the National Trust in the Peak District says: “Kinder Scout is one of the most iconic landscapes in the Peak District because of its vast open moorland, the wildlife that it is home to and because it was the setting for the Mass Trespass. However, it is also one of the most damaged areas of moorland in the UK and it’s future is in jeopardy as a result of catastrophic wildlfires, a long history of overgrazing, air pollution and the routes that thousands of visitors have taken. We’ve decided to take action with our partners to save Kinder for future generations.”
The amount of carbon stored within blanket peat on Kinder Scout is significant and whilst healthy peatlands take in and store carbon, damaged peatlands emit greenhouse gases into the atmosphere. Restoring Kinder Scout to a good condition will have a massive bearing on our ability to tackle climate change.
In addition, most upland moorland is the source for drinking water and because the moor is so degraded, the exposed peat gets washed away, finding itself in our water supplies which presents huge water quality and treatment problems for our water providers such as United Utilities who collect water in Kinder Reservoir.
Mike continued: “The temporary fence which will surround the most eroded parts of Kinder is designed to keep sheep – not people – out and give the plants time to take root. It is temporary and there will be multiple access points for walkers. We want people to get involved and tell us where they think the fence line should be and also where they’d like to see the access points.”
Recently, the Moors for the Future partnership has developed some new approaches to moorland restoration that have seen great success in habitat restoration on Bleaklow and the National Trust is keen to learn from this innovative project. However, the project has only been successful because a complete stock exclusion zone was achieved by erecting a fence around the site which allowed plants to re-vegetate and flourish on areas which were previously bare peat.
Through discussions with Natural England, other partners and local farmers, the National Trust has considered various options for achieving stock exclusion including gathering in the sheep via shepherding each week or by erecting a temporary fence around the site.
The outbreak of Foot and Mouth disease in 2001 and the introduction of new stock movement legislation meant that weekly shepherding was no longer an option. Since then, the National Trust has endeavoured to find a way forward, working with Trading Standards, Defra and local farmers but this has proved to be very difficult.
Consequently, the National Trust has now reached the conclusion that the only way to ensure the successful restoration of Kinder Scout in the current environment is to put up temporary fencing, for a maximum period of 15 years, until the revegetation is established. However, the National Trust is continuing to try and find a solution that would prevent the need for the section of the fence which would extend across the plateau of Kinder.
The proposals are that the temporary fence , which would enclose an area of approximately 1374 hectares, would be on the northern side of Kinder from Park Hall Moor to Fair Brook and on the eastern boundary from Fairbrook to Blackden Brook and then possibly across the plateau to Grindsbrook. The western and southern edge of the moor is already stock proof via existing fences and walls. The National Trust owns much of the land but private owners own other parts.
Terry Howard, Chair of the Kinder Advisory Group said: “Whilst there is an ongoing search for other options we may have to accept the need for a fence if no other solution is sufficient. It’s important to know that walkers would still have access, attempts will be made to minimise the visual intrusion and the fence would only be temporary until such a time that Kinder flourishes again. This is a “short term” price to pay for the long term sustainability of Kinder Scout.”
Consultation will take place during December and January and will include public meetings on 15 December (6pm – 9pm) at Edale Village Hall and on 6 January (6pm – 9pm) at the Royal Hotel, Hayfield. From 1 December you can also give feedback and find out more information via our website – www.nationaltrust.org.uk/peakdistrict
Mike Innerdale
General Manager, Peak District
Posted by National Trust in the Peak District at 11:32 am No comments:

The National Trust Dark Peak Estate Team has been busy this year building dams on the Kinder plateau, and this work is being carried out for a number of reasons, as explained below. The aerial photo of Kinder shows the eroded state of the plateau, with large areas of bare peat and a myriad of gullies criss-crossing the whole area.
Gully blocking is the practice of building dams in the gullies to try and slow down the flow of water in the gullies to prevent the valuable peat from being further eroded. The work is being carried out using funding obtained by the Trust from United Utilities, Biffa and Natural England. To date over

Plastic dams on Kinder
1,100 dams have been built on Kinder, most of which have been put in this year. More dams will be built over the next four years.
A number of different materials have been used to build the dams. Where the peat is deep, we are able to knock plastic piling into it to form the dams – these are very good at holding water, which the second picture shows. Holding back the water allows any peat being washed away to settle behind the dams. This also has the effect of raising the water table and therefore preserving the upland bog habitat. Wooden fence dams can also be built to the same effect. If you are walking across Kinder, please take care when you see the dams and pools behind them, as some of them are quite deep.
Where the peat is not deep, or where the gullies have eroded down to the underlying rock, plastic and fence dams cannot be used, so the dams are built with either stone or logs. The third picture shows some log dams built this week, and the snow

Log dams on Kinder
that fell on Monday. These dams are more porous and do not hold as much water, but they do slow the water down enough for peat to be deposited behind them. They may also provide a foothold for vegetation to grow on and behind the dams.
All the materials are flown onto the moor by helicopter, which minimises the damage to the habitat which would be caused by driving machinery onto the moors. The dams are then built by hand, and in all weathers, as the last picture shows! We do have a hut (shed) on the top for us to shelter in if the weather does get bad.

A typical day on kinder!
The gully blocking work, together with the 300,000 cotton grass plants that have been planted, and other work such as spreading heather brash and reseeding work, should help to improve the Kinder plateau for plants and wildlife, and preserve the peat and the habitat for many years to come.
Jonathan Leyland
Estate Worker, Dark Peak
Posted by National Trust in the Peak District at 10:50 pm 1 comment: 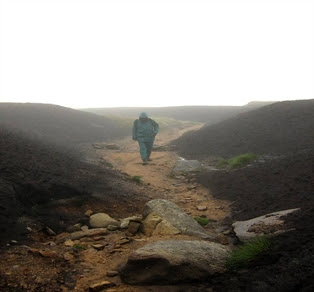 MOUNTAIN DATE: 2010-15:45
SUPERVISORS LOG
On a mountain far, far away, there is a team of Trust workers whose ongoing five year mission is to explore new horizons, build new dams, and continue to walk further than ever. To boldly go where no man has gone before.
To reach out and engage with new contacts, (a sheep with a purple dot walks by.). To continue to suffer the hits to the thumbs with hammers, to keep on falling down rabbit holes, and to keep sliding down steep bank sides. We drive along the steep hill called Derbyshire level, and walk down the marshy hill called Marlow flats, and trudge up to Bleaklow (at least the ‘bleak’s right) not to mention  windy corner (was Tom on Robinsons last night?).
Strange universe this Peak District. Anyway its good to get back to the SHB hired vehicle (we couldn’t afford an Enterprise). The vehicle looks like it’s been through an asteroid belt, all scrapes and dents; it will take more than dilithium crystals to put that right. Ah well, as the klingons say “it’s very cold in space’ – well they ought to try Kinder Scout in a full blown gale in February. Now Scotty, five to beam up.
Steve Lindop
Estate Team Supervisor
Posted by National Trust in the Peak District at 2:59 pm No comments: