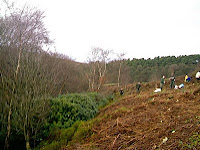 Nine volunteers from MNTV (Manchester National Trust volunteers) turned out and met up with the warden's team in Hayfield.  We travelled part way to the work site using NT landrovers due to limited space for parking where we were working.
It was then a short walk onto Park Moor to continue cutting and
burning rhododendron along the edge of a stream where we have worked before.
There had been extensive rain on Saturday and the streams were full, with surface water in erosion channels in the paths as well.  As most of the
volunteers were experienced it didn't take long to get them going, with
Shane initially requesting that we clear off the small plants from the

flatter part of the moor.
Once we had done all that were within a 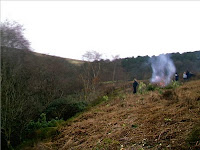 convenient distance of the fire - which the wardens were tending, a few
volunteers continued the cutting process down the slope into the valley.
The rest of the team dragged the cut material up and along to the fire.
We were making good progress and making a visible difference to the
remaining stands of R. ponticum in the valley when a call was received that an access road was collapsing.  As the wardens were needed elsewhere we hadto stop and clear up.  Alex remained behind to make the fire safe whileeveryone else trooped off to investigate.
On investigation it was found that ground water had caused to the surface of
the drive that the landrovers were parked on to blister, and a vehicle had

broken through the surface into rather fluid mud underneath.  We helped
clear an "off road" route around the problem, and eventually went home.

Posted by National Trust in the Peak District at 9:40 am 1 comment:

Today saw the first of the ‘skill sharing’ days at the Longshaw estate. Set up for staff and volunteers, it enables them to experience other aspects of the National Trust’s work in the Peak District, while having the opportunity to walk away with some valuable skills.

Today was a ‘baking day’, with five volunteers, including myself, trying their hand at baking in the kitchens of the Longshaw visitor centre under the watchful eye of Sue, the catering supervisor. All of the cakes and other delicious goodies on sale at Longshaw are made fresh onsite by Sue and her team, so she was the perfect person to help nurture the growing skills of those taking part. Despite the group ranging from novices to those who had baked for themselves for many years, everyone was able to learn something new and five perfect Victoria Sponges and Bakewell Tarts were created.
A brilliant time was had by all and a mornings baking seems especially worth it when topped off with a slice of Victoria Sponge that was made by your own hands! Skill sharing days are a great way to meet new people, learn new skills and understand another aspect of what makes the estate up as a whole. All those who attended were determined to try out the recipes at home, including Dave, our brave novice and only man!
Kate, Visitor Experience Intern
Posted by National Trust in the Peak District at 2:58 pm 1 comment: 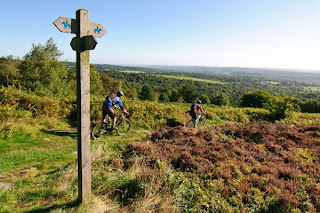 The Moors will still be owned by the Peak District National Park Authority but will be managed by the two charities through the Eastern Moors Partnership.
The National Trust and the RSPB are two of ’s biggest conservation charities with a combined membership of over 4.6 million.
The Eastern Moors cover 27 square kilometres on the western edges of . It’s an area the size of and comprises five moors; Clod Hall, Leash Fen, Ramsley Moor, Big Moor and Totley Moss. The area also includes the popular walking and climbing areas of Curbar, Froggatt and Birchen Edges and 300 ha of broadleaf woodland.
The National Trust and the RSPB plan to continue to restore internationally important habitats like blanket bog, increase wildlife, including curlews and water voles, and improve access for the hundreds of thousands of people who already visit the site.
The site is currently visited by a quarter of a million people from around the world each year. The is one of the most visited National Parks in the world.
Fiona Reynolds, National Trust Director General says: “The Eastern Moors is an area of extraordinary natural beauty and an incredibly important habitat for wildlife and an internationally important site for its archaeology.  I am delighted that the National Trust and the RSPB are working together to provide some opportunities for people to enjoy this area of countryside and get closer to nature, whether they are climbers, mountain bikers, walkers or simply in need of some spiritual refreshment.”
Mike Clarke, RSPB Chief Executive, says: “People are very proud of the Eastern Moors and rightly so. It’s got it all; it’s a stunning site which offers a great day out for all kinds of visitors and is home to incredible wildlife.
“The Eastern Moors Partnership will be working hard to enhance the current experience that visitors have and will provide new ways for people to enjoy the site. At the same time, we will develop a land management model which will be an example of how uplands can be managed in the future for people and wildlife.”
Jim Dixon, Chief Executive of Peak District National Park Authority, says: “We want the Eastern Moors to remain a superb resource for both wildlife and people, and that’s why I’m pleased that the Authority is entering this unique management partnership with the National Trust and RSPB. We hope that their national strength, working in harness with local communities, can develop the Eastern Moors to their full potential for biodiversity, access, landscape protection and carbon stewardship.”
Other wildlife in the area includes the only adder colony in the Peak District, as well as water voles, golden – ringed dragonflies and one of only two wild herds in the Peak District.
The landscape of the Eastern Moors has been shaped by man over millennia, with evidence of prehistoric activity, medieval routes, post-medieval industry, 19th century agriculture and World War II activity.  Previous archaeological surveys have recorded the largest and most significant group of prehistoric remains known in the Peak District, with exceptional evidence for prehistoric farming, settlement and ritual landscape dating from the late Neolithic to the early Iron Age.  Currently an extensive archaeological landscape survey is taking place of the area managed by the Eastern Moors Partnership.
Last year the National Trust and the RSPB, through the Eastern Moors Partnership, organised a series of consultation workshops to hear the views of people about how the Eastern Moors should develop in the coming years.  The findings of these workshops, including people’s ideas, their connections with the area and their memories of it have been used to inform the Eastern Moors Vision which will guide the management of the area.
The two charities have recently advertised for new farming tenants, who will graze hardy breeds of cattle. As well as providing sustainable farm incomes, the way they manage the land will deliver a range of public benefits, such as improved water quality, reduced carbon emissions and management of carbon locked up in the peat.
For more information about Eastern Moors visit www.easternmoors.org.uk
Posted by National Trust in the Peak District at 2:00 pm No comments:

A whispering death, that stalks the endless night
Ghostly translucent apparition, reflected by the bright moonlight
In silent poetry, glides swooping down the gentle breeze
Large rounded wings that stirs not even the smallest leaves.
Heart shaped face, in which unblinking eyes stare
Eerie screeching, echoes triumphantly through the air.
As grasping talons, reach and grab their hapless prey,
The first of many ere the break of day.
And be not fooled by its gentle solemnity, in quiet repose
Or think it beautiful, or wondrous as a rose.
An assassin of the shadows, the master of the silent kill
A predator supreme, surpassing all ninja skill.
Steven Lindop,  Estate Team Supervisor 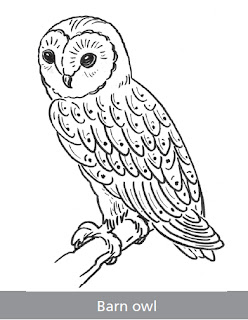 Posted by National Trust in the Peak District at 10:45 am No comments: