The Longshaw Trail was our Choice Today...

Here's a poem written by visitor Sarah Harmer who completed our Longshaw Geocache Trail. Come to the Longshaw shop to borrow our two GPS devices and have a go for yourself! Locations for all of our Peak District Geocaches can be found here: http://bit.ly/vRPfbm
The Longshaw trail was our choice today
Five series' caches and one more along the way.
With georellies we set out just before ten
By 2.00 we'd be back at the Lodge again! (for our free cuppa!)

The walk was fantastic over different types of terrain
And although it was cloudy it did not rain.
All five caches were easy to find
We examined the contents and each log we signed!

There was heather, bilberries and bracken too
There were trees of all species to frame each view.
We saw several cows and lots of sheep
Most were eating but some were asleep!

This is a wonderful circuit of less than five miles
We crossed bridges, forded streams and climbed several stiles.
For the series a favourite point we definitely award
And for us, four hours of fun was our reward!

From the lodge it wasn't far to cache number one
We looked for the TB but sadly it was gone.
We found the ice house, an interesting site
And set off for cache 2 on the route that was right!
From cache number one it was about a half mile hike
Along the sort of terrain we really like. (i.e. easy!)
Having located the cache, we enjoyed the view
And learning about the location was interesting too!
It wasn't hard to find cache number three
We punched our log for that free cup of tea.
We learned about the quarry and the millstone grit
And mile-a-minute and Commander H agreed this walk was a hit!
It didn't take long to locate this cache
But with gnats all around we had to dash.
There was just time to measure the tree (before we got bitten to death!)
And with cachers before us, an age of 56 years, we agree!
On the route from cache four we spied THAT van
And the most junior team member to this he ran. (he's forty something...!)
But as he was first he had to pay for us all
And we licked our ice-creams as we leaned on the wall!

This final cache was too easy to find
As it was very exposed so we hope you don't mind,
We've hidden it better but in the same place
So others will still find it easy to trace!

For the views of Carl Wark and Higger Tor
For such a wonderful walk we are awarding you once more.
A favourite point, and we just have to say
We will be back to enjoy the walk again on another day! 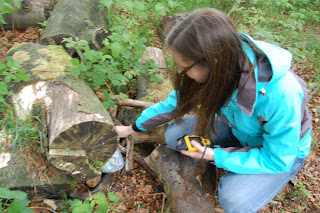 By Sarah Harmer
Visitor to Longshaw Geocache Trail on 30/08/2011
Posted by National Trust in the Peak District at 2:06 pm No comments:

Software Company does some Hard Graft

On Tuesday 18th October, 14 staff members from Tessella Technology and Consulting met our Estate Team at in Hayfield for a day of volunteering.
With changeable weather and a biting wind, the group readied themselves for a day of gully blocking on top of Kinder with an air of anticipation, enthusiasm and only slight concerns about the blackening skies. 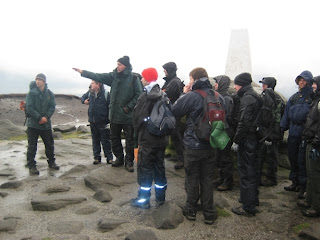 After a quick and bumpy ride in the Land Rovers to the bottom of Kinder Low, the group began to ascend the steps to eventually reach the shelter of the rocks on the plateau.
Whilst admiring the incredible views across to the Kinder Downfall, the spray of which was blowing upwards to look like smoke, Steve Lindop, the Estate Team Supervisor, told the group about the techniques that the National Trust had employed over the years to lay the paths that they had been walking on.  Steve also gave the men a fascinating overview of the history and archaeology of the mountain; however it was during this talk that the threatening weather front finally hit the group and brought with it a mixture of hail and sleet.
Sheltering in their hoods (and, in one case, an umbrella!), the group walked on, battling the winds and ice, to eventually see Kinder’s trig point appear out of the gloom.  It was at this moment that they finally spotted the work site in the distance.
Heading towards the bright white bags of stone, the group members were advised to walk with caution since they had left the safety of the path and were now on open moorland.
Negotiating a route through the squelchy peat, the men wove their way through the complex network of gullies to eventually arrive at the site near Noe Stool. 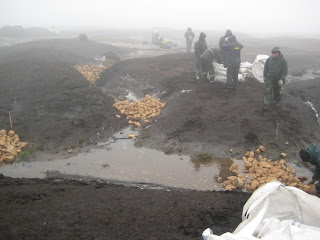 Without hesitation, they donned their work gloves and, after a quick demonstration, began to unload the half ton bags of stone into the gullies.  The purpose of gully blocking is to slow the run-off of water down the mountain, which in turn reduces the amount of peat that ends up in the reservoir below.
As the men worked they witnessed their efforts beginning to pay off with water pooling quickly behind their stone dams.  An unexpected upshot of getting a group of software engineers to do this task was that their professional eye for detail resulted in some of the neatest blockades on the mountain!
Ninety minutes later, with 40 bags unloaded, the weather had worsened and yearnings for a pub lunch were growing stronger, so the decision was taken to head down the mountain, past Swinesback and Edale Cross and into the comfort of the Land Rovers.
Needless to say, we would like to thank Tessella for all their help that day and for braving the atrocious weather to make a real difference to the National Trust’s work on Kinder.
By Cathryn Hamer, Volunteer Programmes Manager
Posted by National Trust in the Peak District at 12:24 pm No comments: